Africa is a country – December 10, 2015
by Neelika Jayawardane

Never in my wildest dreams did I imagine that I would find myself in Malick Sidibé’s iconic studio space – at Porte 632 on Rue 508 in Bamako’s Bagadaji district, on the north side of the Niger river – getting my portrait taken by his son. But there I was, during the first week of November, gawking at the rows and rows of cameras collecting dust on the shelves, the props that he used again and again in his photographs: there was the bouquet of ragged, artificial flowers, the back and white checkered backdrop announcing itself loudly as a departure from the woven blankets historically used to line walls in Mali.

Malick Sidibé – the cameras on the shelf

There was the little radio that so many hands held to illustrate, for their friends, that they were part of the flows of modernity: Sidibé could remake or highlight your persona, aligning it with the youthful world of cool music, dancing, and big city dreams. The photograph that his son took of me, decked out in a lollipop orange and gold silk-chiffon sari bought in Madras is not the flawless image for which I’d hoped: my sari was askew, and the photograph was taken from too low an angle. There’s too much grey – the contrast is not great, and the Sidibé magic is not there.
But I didn’t care. None of that mattered.

In 2015, the tenth edition of the Encounters Biennale of African Photography (popularly known as Bamako Encounters) promised to return big – but innovative and experimental. It is young enough to take brash risks – whilst still maintaining its eye on Mali’s photographic heritage; it went international and inclusive of the African Diaspora – but retained its relevance to the locality in which it was firmly situated. Olabisi Silva, Independent curator and founder of the Centre for Contemporary Art (CCLA) in Lagos, Nigeria, recognised the significance of this event as a definitive moment for Mali – a re-coming out party if you will – meant to restore local, continental, and international confidence in the country’s return to stability. Silva noted, in Contemporary&, “This notion of telling is a gerund: it’s not ‘tell’, it’s ‘telling’, because it’s continuous from the past to the present and into the future”; given the events of the past year – Ebola epidemic ravaging Liberia and Sierra Leone, Boko Haram in Nigeria, uprisings that ousted firmly seated dictators, Silva “wanted to reflect on what it meant to live today. So I thought that ‘Telling Time’ was really a perfect way to begin to articulate different levels of stories, of narratives.”

In order to set the tone for this grand return, Silva sent an open call over Twitter and Facebook to all photographers to send in their work for a wall of contemporary work that will re-imagine what it means to visualize being “African” in this moment. Part of the curatorial impetus for Silva and her team – which includes Ivorian-born architect Issa Diabaté (who is focusing on the biennale exhibition’s design), and associate curators Yves Chatap and Antawan Byrd – was to go beyond paying ceremonial homage to local history, only to go on to overwhelm a decorative reference to locale with a flashy list of international invitees. So as to actually imbed the local into the fabric of an international event, and to ensure that it has resonance in the local landscape of image-making well beyond the scope of the Biennale’s lifespan, Silva spent a significant amount of time developing relationships with different photographic associations in the city of Bamako, and in the country as a whole: in the same interview, she noted earnestly, “Every single Malian photographer has a responsibility to become invested in the Biennale and believe in the ownership of the event.” In a way, as curator of photography in a politically crucial time in a nation that is already home to a proud photographic history that it can call its own, she had to become a nation-builder extraordinaire, too.
Knowing that the overarching theme of the Biennale was “Telling Time” meant that we focused our attention on the invisible presence of temporality in photographs. This relationship between time and photographs, highlighted and visualized by several artists included in the main exhibition spaces, emphasized photography’s ability to conjure up traces of the past, to realize that past in the present, and perhaps that the present is also evident in a co-existent past. To that end, Silva and her team selected a range of lens-based artists who had experience in documentary, performative, and conceptual photographic practices. The thirty-nine artists whose work is shown in Bamako work in all the innovative possibilities that the technology of photography and lens-based artwork offers us today, from old-school developed film, digitally manipulated collages, video work juxtaposed with still frames, stills from re-enactments of iconic Hollywood films, and fantasy vistas projecting Afro-futures. As might be expected, there were studies – or anthropological excavations, if you will – of the photographic specialty for which this part of the world is renowned: studio photography. Senegalese photographer Ibrahima Thiam’s “Clichés d’hier” (“Pictures of yesterday”) re-positions images from his own family’s albums among collected photographs from other individuals – some intended for identity cards required by the state, and some for personal pleasure. All of them are neatly arranged in a performative stage that mimics the black and white checkered cosmos of the ’60s studio. 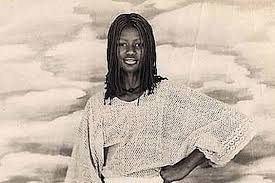 Thiam’s imperative to collect studio photographs began when he was a child, beginning with images from his family’s albums; today, he has 350 photographs: an archive of portrait photography from Senegal, including those by pioneers of Senegalese photography, like Meïssa Gaye, Mama Casset and Salla Casset, Doudou Diop, and Julien Lopez.
When we walked into the small, three-walled alcove, we were re-viewing and re-enacting both state and family histories, immersing ourselves into stories that told of ambitions, desires, hopes, loves withheld and loves given generously. Standing in this reconstructed studio space, we were telling time, telling story, telling life.

No doubt, the memory of Mali’s immediate past was in evidence, subtle though it may have been at times, layered over the inscrutable present. At the hotel, armed guards always checked under the car for bombs using one of those circular mirrors attached to a long pole. Sometimes, they asked the driver to open the boot and bonnet. An armed guard checked our handbags at the front entrance to the hotel. These measures are, in many ways, ceremonial, meant to display an air of security and control – no different from the airport security in the U.S., however tight. At one point, after our car was permitted into the hotel compound, one curator said, “we could have been hiding guns under our feet.”

On the streets, the military was omnipresent, but not obnoxiously so. Guards in military fatigues sat under canopy in front of the Institut Français buildings, in which artists from Niger had their work displayed, boiling water for tea. But the French were paranoid; on the plane from Casablanca, we heard that at least two French journalists in “junior” positions were sent because their superior thought it too unsafe to travel to Bamako. “Stupid her, lucky you!” I joked with one. We all made fun of all the poor French journalists, who were required by the French Embassy to travel from hotel to art venues in one bus, with an armed guard present at all times. At one point, we saw one of the French journalists had escaped the hotel’s confines: she was walking to a restaurant a few meters away, but even then, the armed guard accompanied her discretely. “You didn’t see me,” she mouthed playfully to my French friend. But it would have been a mistake to think that the city’s inhabitants were laissez-faire about the military’s presence. During a taxi ride to a hair braider’s salon, we heard loud honking and flashing headlights: a open military truck filled to the brim with soldiers in fatigues, barreling down the road wanted to get past. Everyone quietly moved to the side of the road and let them pass.
Despite the unmistakable presence of military men – local and foreign – leaving one with an impression that this was, in many ways, an occupied city, the air was clear and sweet with motorbike fumes, dust from traffic, midday heat, fruit, and grilling fish, and conversation between photographers, writers, and curators from all corners of the African diaspora – Parisian Madagascarians, itinerant Kenyans with footholds in Dakar and Cape Town, South Africans who didn’t feel at home in their country, and to top it off, Afro-Brazilians from Bahía who arrived in Bamako International Airport without a visa for Mali, “as if they were returning home, to the motherland,” joked someone. (Samuel Sidibé, the Director of the National Museum of Mali who is largely responsible for running the biennale, reportedly went to the airport in the wee hours to “negotiate” with immigration officials and get permission for the Brazilians to enter.)
When the writers, curators, and photographers attending the Biennale settled into those easy conversations that happen by the second and third days of close proximity to each other, we swapped stories about the UN soldiers stomping through hotel hallways and the foreign personnel crowding the hotel bar, here to instruct Malians on decentralisation. The artists were staying at the Azalai Hotel near the Musée National de Bamako, and the curators and journalists were staying mostly at Hotel Onomo. One night, some of the artists noticed that there were gigantic armed guards on each floor; they learned through the grapevine that a many-starred general was staying there.

But none of that mattered.

What mattered was that Malian women were zooming past on motorbikes – that they were driving them, not simply content to be propped on the backseat whilst some paramour took the handlebars to direct her down the road. There they were, almost clichés of beauty and style, decked out in their ordinary best: figure-hugging skirt and blouse ensembles, tailored to suit their every curve, head-wraps in complementing or contrasting colors. Everyone attending the Biennale (all the foreign visitors, that is, including those from neighboring Senegal and Nigeria) remarked on the motorcycle sirens – so self-assured, so practical, weaving about the traffic with a sister, a friend, a youngster on the back-seat. We gawked at them without shame. If Sidibé was still photographing, no doubt these women would be on his list.
What mattered was that it is lush here, an ordinary, everyday, wide-leaf abundance, easy-going camaraderie, and fertility of imagination and intellect. I could walk into some out of the way little restaurant with my two new friends, Mekbib Tadesse and Aaron Simeneh, young Ethiopian photographers trained in Aida Muluneh’s studio, order the grilled fish and rice, and a government minister washed his hands at the same bowl as ours – bending down to the floor like any peasant. Naturally, he struck up a conversation about Samuel Fosso and Malik Sidibé.

What mattered was that after years of having twitter sass-offs with a mysterious Nigerian contributor to Africa is a Country, he shows up with a gin and tonic at the hotel pool, dipping his toned calf muscles into the water whilst immersing himself in and out of conversations about this or that photographer’s work, making politically incorrect asides about the Mauritanians seated on the back patio space checking out my backside, packed inside an electric blue Speedo. And him? Yes, my friend’s own beauty was in evidence, and someone was there to admire it, too. But those glances were so painfully elegant – and the recipient so willfully ignorant – that I couldn’t make fun of this moment. I only wished that I hadn’t lost my camera in a surfing accident years ago, and that I was still making images. This, here, was something I wouldn’t be able to get across with words alone.
© 2015 africasacountry.com

captured for a moment

Under the Mango Tree

Volunteering, Travelling and Living in Ghana